SHARE
New features for the operating system that run on iPhone , apple watches,iPads, Macs was announced at the Annual World Wide Developers Conference in California.
ITunes is being replaced with Apple music, Apple TV and Apple Podcast. The App however will continue to be on iOS .
Apple is going Dark Mode just like some apps like twitter. Apple product will have an optional dark mode in iOS 13.
Maps are going street level .
Another new feature is it’s own login platform coming through in ios13 called Sign in with Apple which let you log in to outside apps with FaceID.
Unfortunately the IPhone 5 and 6 are incompatible with iOS13.
See devices compatible after the cut. 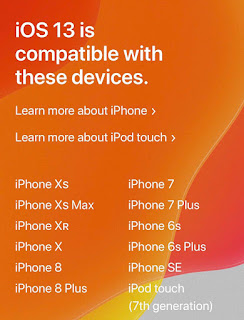