SHARE
I put up a tweet earlier about the the sad incident that happened around 1:30pm on Monday; I promised to dig out facts and more details as to what exactly 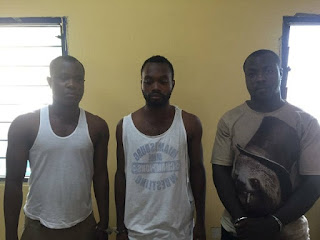 led to that sad incident—here is the story.

The three suspects arrested in connection with the cruel act that was dealt upon the two accused men(Kwaku Akoli 51, Hope Hortor 21)they accused of stealing some iron rods meant for binding at the construction site where the said missing iron rods were kept; are people You would know either by accident or through mutual friends if you live or work around Madina or Circle. I’ve known the Man on the left and the one on the right for about 8years now—the one in the middle I know also but I’ve never interacted with him; I can personally confirm that the voices heard in the video are that of the three suspects and I can identify each voice of the three, individually. The one on the right(Mannaseh Adzroku) is a successful business man that I have so much respect for because he made it out of extreme poverty at an early age; he’s about 32years of age now. The one on the right(Collins Amoako)is a person I’ve never respected and never liked; He claims to be 41Years because he loves to be seen and addressed as a matured elderly man—personally, I believe he can’t be more than 36 because of his childish character. His level of sycophancy can be rated at a ratio of 9/10, he never disagree with or condemn Mannaseh when he goes wrong/when he is about to do the wrong things, he usually agrees with him whether good or bad, thus his favourite reply/phrase is “ɛɣɛ fine”(good idea)whenever his Boss seeks advice from him….this, he has shown too many times; he is also a deadly, backstabbing fellow. He personally saw to it that people who worked for Mannaseh previously got sacked for the most bizare reasons and I know most of them. The one in the middle(Victor Harrison)is a CCTV installation guy who has grown into a “forced personal” relationship with his rich customer(Mannaseh)and he will do anything to impress him—he was actually the person recording the sad incident with his phone and you could hear him saying “talk, talk, e go over you, you go see say e go over you” giggling and laughing whilst the men were being tortured. Were they plainly stupid or ignorant, to carry out this type of torture that has killed many and the international communities frown upon?
This torture could have killed them if the police had not intervene that quick; they were not professionals and wouldn’t even know when the heart stops—this technic is called “water-boarding(though without the usual towel)” which the USA has banned because it’s inhumane.
The accused worked for him(Mannaseh)—before i go deeply into that let me quickly explain the relationship between the elderly man and the owner of the building(Mannaseh), the old man has been working with Mannaseh on his real estate since he(Mannaseh)ventured into real estate business about 7years ago; and that can be dated back to the time he bought plots of land around Dodowa, Oyarifa and Abokobi—One will wonder why he decided to torture a 51years old man that has been working him for since day one. The answer is simple; people like him believe they can get away with anything because they are rich—don’t get me wrong, Mannaseh is someone I very much respect and I have nothing against him but watching that video and seeing how he had no humane feeling and how his conscience was automatically switched off is quite disgusting. A good samaritan(Name witheld)had to alert the Police and a Police patrol team were dispatched to the scene and they were caught in the act—those who witnessed this said the elderly man collapsed as soon as the police rescued them and they were rushed to the Danfa Health Center immediately.
Obviously, this story went viral on several news sites such as Joynews, Cityfm, peacefm etc—Public Relations Officer (PRO) of the Accra Regional Police Command, Deputy Superintendent of Police (DSP) Effia Tenge told the Ghanaian Times, in Accra; on Monday night that they got information from a source claiming there was an active crime being perpetrated at the said location; police patrol team in the area were quickly dispatched to the scene of the crime and caught the suspects in the act. They were denied bail until wednesday night, currently I’m not sure if the two accused men are going to make this case an out of court settlement; which i believe will be ridiculous because this is a criminal case—therefore, the State has the duty to see to it that this pre-meditated crime is handled properly because this is not a civil case, the victims should be compensated for the cruel act dealt on them even if the suspects are to serve a jail sentence. However, I will do a follow up on this story and see where this leads us to. I will not condone/accept/support mob justice and torture just because I know them; this generation is a failed one, until we all become that guy with a conscience who picked up his cell to call the Police; we will never make Africa a better place. The disregard for human values—due to the high rate of poverty by the rich is a disappointing thing to witness/experience and I’m ashamed to see humans treating fellow humans this way. I hope they don’t pay their way through this and escape justice.
People should know that they are not above the Law just because they have money; and those who commit atrocities on behalf of rich men in our societies today should also understand that at the end everyone would want to save themselves when they get caught and the reality sets in. I’ve added the video of the torture and the three suspects’ pictures. May we never allow anger to get the best of Us. Torture is inhumane!
Photo credit: Daily Graphic
Video: (Name Witheld)
Written by Bright Sarpong
Twitter: @LegitSarpong 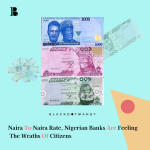