SHARE
So I was on facebook last night and I came across one of the many Shatta Wale’s nonsensical live videos that had been downloaded and shared by many media sources and indviduals; a 12minute long video—because I don’t follow him on any of his social media accounts and don’t pay attention to any of his shows whenever/wherever he goes to perform, I didn’t see the first video where he said “Ghana is a village” however, as i checked other sources, I saw the first video where he said such thing repeatedly. He is a 34 or 38 years old man misbehaving again as usual he never wants to grow up.
I took an interest in that video because of the captions on the video by different individuals and some few blogging sites that posted it on facebook, because on a normal day I would have skipped; the dude was literally ranting about something that didn’t even make sense(he doesn’t make sense anyway). I then decided to watch the entire 12mins video—he was unapologetic, he said Ghana is a village and all the people in it are villagers(myself included, the President included, his SM fans included) but I could careless about whatever his personal opions about Ghanaians are. He talked about being humble and talked about being a self-made man; nobody helped him get to where he is now because he did his own recording studio, made music and he sold the CDs and E-songs to his Family alone; since he’s claiming that no Ghanaian supported him(including his fan base). He talked about his personal relationship with the President and went on to repeatedly say “Ghana is a village and everyone in it are villagers” then he started to brag about his achievement all over again and again. All of these didn’t/don’t concern me—We all know Shatta always seek out controversy and attention, but what took me by surprise was something but funny at the same time; he(Shatta)said when he arrives in Ghana from his tour, he will make the country ungovernable. He bragged that he and his SM fans will disrupt any media house and beat up journalists and panalists; he even included bloggers and that he’s capable of infringing upon the right to freedom of speech and the Law that protects Journalism and Journalists that we all enjoy as citizens and nobody will dare stop him, not even the “President and the entire Ghana Police.”
At this point, He became more aggressive and he talked about coming to Ghana to carry out these threats by going to every media house that condemn him; he also said when it begins, the President and the Ghana Police Force will “come to me and say Shatta Wale We dey beg You”—I’m sure by now You must be laughing too like I did. Now, I need answers to this question—Is Shatta Wale above the law, enough to threaten the Government and the citizens of Ghana? This isn’t the first time he’s breaking the laws of the Country. To be honest, he has an influence on some specific group of the Youths in this country and we all know his fan base are mostly drug addicts of codeine, tramadol and cocaine. Now with such kind of rowdy fan base, his threats cannot be deemed as an empty one—and I recommend a quick action to arrest him for making such  treasonous statement and hate speech. Yes I demand as a bonfide Citizen of Ghana, that Shatta Wale should be arrested upon his arrival in Ghana because he didn’t only threaten the media houses but he also threatened bloggers—like me; and as a blogger I fear my life is in danger right now because he threatened to beat up anyone who writes a negative story about him.
This is a serious national security threat and should be treated as such. I’m ashamed that this President that i voted for alligned himself with a nuisance and an uncultured arrogant idiot—a rogue and a stupid wannabe thug/gangstar. Who is he to complain about what People write about him, hasn’t he in recent days been criticizing his ally(President Akuffo Addo)? Not even the President can make such a threat. With all of this unfolding, I now believe that an idiot will forever be an idiot and a stupid person will never know he’s stupid; he can never change—this is a guy who preaches about unity and loyalty but doesn’t give any. He complains about “support Your own” but then turn around to create disunity among our Youths and fellow Artists.
Now, to the brainwashed Shatta Wale fans that go around screaming “For life is for life” should now come to the understanding that their idol/role model said they are all villagers repeatedly; except if You are not a Ghanaian. If Shatta Wale is reading this or any of his fans—I want him and them to know that gangsterism has no place in my beloved peaceful Country(Ghana), and if he’s going mad/insane he should quickly check in at the nearest psychatric hospital before he do any harm to himself or anyone else. H.E. President Akuffo Addo should condemn this violence being incited as soon as possible and the Law of the land must set him as an example to his drug addicted fan base so we can all be safe. Thank You for taking the time to read this; please share this for awareness of the danger that Shatta Wale and his drug addicted fan base pose to the general public.
Written by: Bright Sarpong
Twitter: @sarpongmic 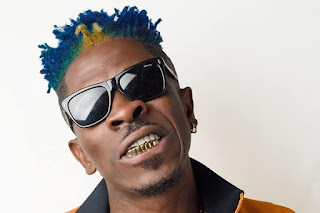 Share this Article
Facebook Twitter Whatsapp Whatsapp
Previous Article BOMBSHELL!!! FELLA MAKAFUI TOLD HER SUGAR DADDY RELATIONSHIP WITH MEDIKAL WAS JUST AN UPCOMING MOVIE
Next Article BENIN WAVE COMING TO THE CITY OF BENIN WITH PERUZZI AND ERRIGGA LIVE ON THE 2ND OF DECEMBER
Leave a comment