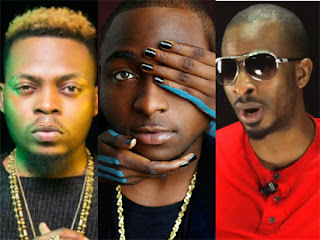 The National Broadcasting Corporation, NBC, has banned five songs by Olamide, Davido and 9ice, having considered them offensive for broadcast, according to online portal, Premium Times.
The banned songs are Olamide‘s “Wo” and “Wavy Level“; Davido‘s “Fall” and “If (Remix)“; and 9ice’s “Living Things.”
The corporation released the list yesterday, saying it banned the five songs from being aired across the Nigerian airwaves.
The Federal Ministry of Health had in a tweet on Friday, said the video to Olamide’s “Wo” violated the Tobacco Control Act 2015.
The 28-year-old rapper, who is signed to his own record label, YBNL, had returned to Ladi Lak in Bariga where he was raised to shoot the video of his latest single.
“This is our position: video contravenes the act. Innocently or otherwise, Tobacco Promotion Advertising Sponsorship is banned in all forms,” the NBC said.
It could not immediately ascertain why the songs of the two other musicians were banned.
In June this year, the federal government, through the Ministry of Health, had launched a campaign to ban smoking in public places, including motor parks, shopping malls and health care centres.
The Health Ministry, in a communiqué, said according to Section 9 of the Nigeria Tobacco Control Act 2015, once convicted, offenders are liable to a fine of at least N50, 000 and/or six months’ imprisonment.
Tweeting the information via its official Twitter page, the Ministry claimed that the video, which features ghetto scenes in which youth are seen smoking, encouraged second-hand smoking.
This is not the first time that an Olamide song will be banned by the regulatory agency. In 2016, just a few months after the ban of one of his songs, ‘Shakiti Bobo’, NBC also banned, ‘Don’t Stop’ which is a track off Olamide’s 5th studio album, Eyan Mayweather, for its vulgar lyrics.
Defending the decision at the time, the NBC said the song was banned from being played on the airwaves for its ‘obscenity, being indecent, vulgar languages, lewd and profane expressions like ‘wa gba ponron’, ‘I just want to hit you now’, ‘je kin wo be…”
Rapper Falz had also in June, criticized Nigerian musicians who glamourised fraud with their lyrics, a criticism fans took to be directed at 9ice for “Living Things.”
The actor and rapper stated that the recent trend of hailing Internet fraudsters in music is not helping future generations as the young ones are beginning to see this as a normal way of life.
He recounted the personal experience of challenges faced by Nigerians in other countries as a result of cyber crime.
“No person shall engage or participate in any tobacco advertising, promotion or sponsorship as a media or event organizer, celebrity or other participant,” it read.
According to the 2015 law, anyone who violates the law faces the risk of a fine and jail term of not more than one year.
Persons that produce or publish advertising, promotion or sponsorship content shall attract a fine of not less than N3,000,000 and a term of imprisonment of not more than one year.
If the tenets of the tobacco-control act are followed to the latter, then the rapper is at risk of N3 million fine, one-year jail term over ‘Wo’ video.
SOURCE : Vanguard  Ng