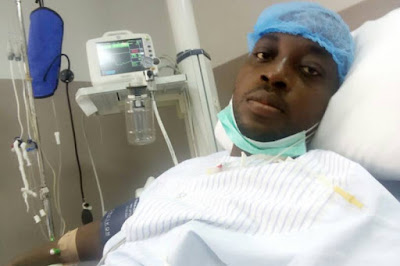 APPEAL FOR FUNDS FOR A SECOND KIDNEY TRANSPLANT AFTER AN INSTANT
FAILED PROCEDURE AT THE LAGOS STATE UNIVERSITY TEACHING HOSPITAL
(LASUTH)
My name is Owofolaju Olumide Samuel, a 34 years old END STAGE RENAL
DISEASES PATIENT (ESRD), I have been with the diseases for almost 2 years
now, and I have been dialysing just to keep me alive and well. Altogether, I and
my immediate family have spent over N2m ($5,600) on dialysis for this period, this
includes 3 times a week session of dialysis and drugs to boost blood and
control my High Blood Pressure.
We were adviced to consult the Lagos State University Teaching Hospital
(LASUTH) for further diagnostics which we did around January 2017, we were
adviced to go for a kidney transplant and was convinced that LASUTH could handle
such a delicate surgery. We were given an estimate of N8m (Eight Million Naira)
which we subsequently ran all round to get. We paid the sum of N8m (Eight
Millon Naira – ($22,000) ) around February 2017 and waited for the pre-transplant work-up
My mum was to be the donor, but along the way, she was found to be unfit,
then my mother-in- law came forward and we matched correctly, this is
according to the Doctors doing the work-up. Though the process was delayed
that it took (February-October 2017) for them to prepare us for the transplant
surgery and all this while, cost of dialysis kept rising.
Finally, we had the surgery on October 13 th 2017 , with all the long awaited
period of preparation, with all the expensive test that ran into millions and all
the emotional and psychological trauma of going through dialysis, its came out
unsuccessful, reason been, HYPER-ACUTE REJECTION, no blood flow to new
graft….
You can help him by donating to his gofundme account just by clicking HERE and your prayers would go a long way.