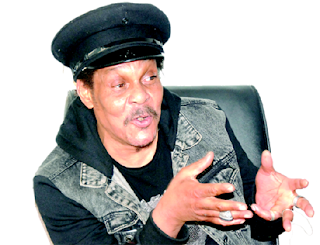 As count down to the celebration of his 30 years on stage which is scheduled to hold on the 10th of September, 2017, begins, the world acclaimed rainmaker, Majek Fashek has bragged of his credibility as an international singer whose music is still relevant anywhere in the world.
According to Majek, his musical tutelage under the late Afro beat king, Fela Anikulapo Kuti gives him credence as an internationally recognized musical visionary who mirrors the socio-political and economic travails of the common African man in his songs.
•Majek Fashek at Vanguard Head office
“I was trained by Fela and that is where the inspiration to sing about Africa while addressing the political, economical and all the societal issues associated with it stems from. My Weep Not Children addresses the plight of the African child. I didn’t start singing about Africa today, that is why my music is relevant internationally,” he bragged.
Meanwhile, award winning media icon, Sony Irabor, has taken out time to shower encomiums on the legendary reggae star, applauding him for the indelible landmarks he has been able to achieve in his 30-years as a Nigerian international entertainer who has made history in spite of his troubled times. In Irabor’s opinion, Majek is a living legacy who deserves to be celebrated against all odds.
“Majek has left an indelible mark and you cannot wipe away history, you can only celebrate the legacy he leaves behind and I think this man is a man of legacy”, Irabor said.
Majek’s manager, Uzorma Omenka Day, revealed to
Sidebeat that work is in the pipeline to make Majek’s 30-years on stage concert a historic one because Majek is an international artiste of repute. Speaking further, he said Majek’s latest album titled, Weep Not Children will be released on the same day of the concert. He called on the former governor of Lagos State, Bola Tinubu, Akinwunmi Ambode and corporate bodies to lend a hand of support towards the success of the concert.
“Majek is deserving of honour; if the Americans and Britons can celebrate him why not Nigerians? So I’m calling on Governor Akinwunmi Ambode, Asiwaju Bola Ahmed Tinubu, Governor Godwin Obaseki, and corporate bodies to support the event, we need sponsorship. Majek is coming back to production after this album. I know not many people knew he started out as a producer before delving into music; so soon he will be producing young artistes”, he said.