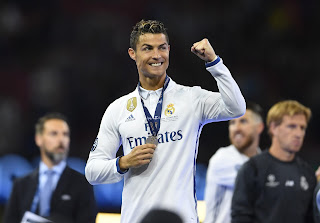 Cristiano Ronaldo has decided to stay at Real Madrid, reports AS.
The Portugal international superstar stunned the footballing world last month when sources close to the player revealed he wanted to leave Spain this summer.
Talk of a return to Manchester United soon followed but, according to AS, on the advice of his camp, the 32-year-old has decided to stay at the Bernabeu.
Ronaldo is excited by Real Madrid’s transfer activity this summer, while the club’s plans for the 2017/18 season include the forward as the most prominent piece of their project.