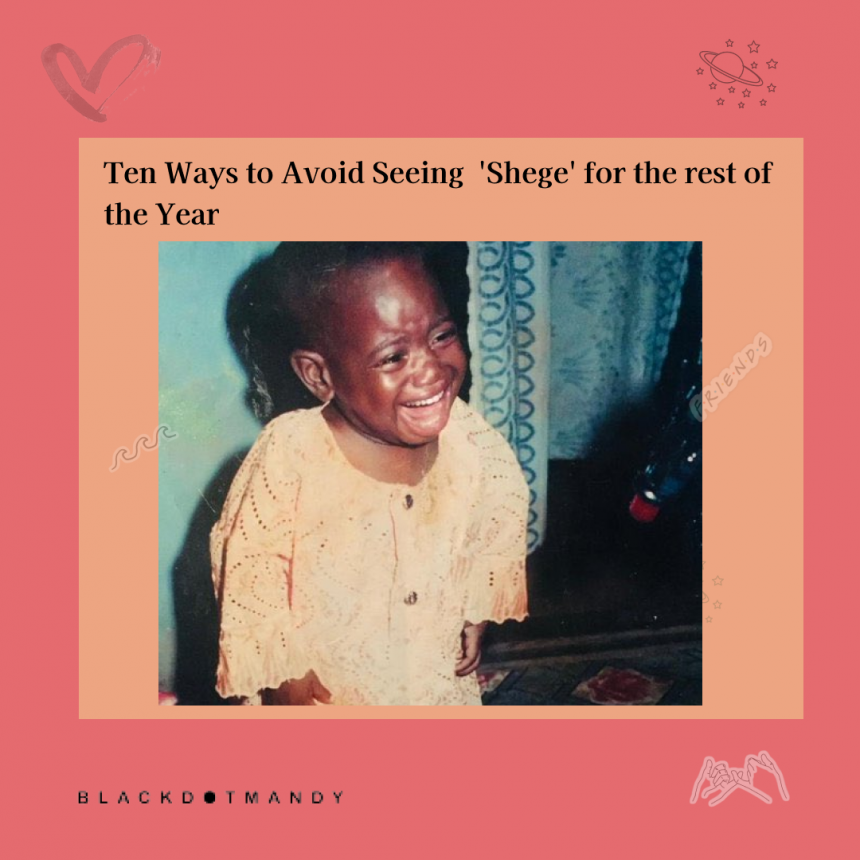 Ten Ways to Avoid ‘Shege’ ? We got you. Running from a lot of shege but it always seems to catch up? We are not promising this to be effective but with enough focus, you should be able to avoid Shege for the remaining days of the year and if you’re super gallant enough, Shege will avoid you at the end. In other words, show Shege enough Shege. Shege must hail, It’s like one of those episodes in Merlin were Gaius uses poison as medicine.

Contents
Don’t leave your house Find a support group for free login for streaming app “There’s food at home” tops our Ten Ways to Avoid Seeing ‘Shege’ If the T-fare budget is beyond 1K Naira, don’t leave your house.If you dip it, Sapa is actually character development. Think about the traffic you’re about to face, Bolt surge is not the answer – JUMP THAT MOLUE Delete those screenshots, you don’t need those clothes you’ll never buy them.Iphone 14 pro max or 13 pro max ? Same phone, why are you upgrading?Become a scissors, you might need to cut some people off Don’t go to the village this december.

If you’re seeing Shege like us, let’s hug ourselves and create a support group. But here’s how we are sure to get through the rest of the year until then.

If it’s not important, why are you leaving your bed? Learn to prioritize, not all hangouts, and house parties are worthy of your precious time. Unless the networking event is vital to you, your career or goal, you might want to sit this out. Remember you’re avoiding shege and that includes anything that will result in billing and the front and back of your debit card.

Find a support group for free login for streaming app

Its called killing two birds with one stone and in this case it’s multiple. A family plan is the way to go from Apple music to multiple profiles on netflix, prime video, showmax and so on. Payment can be fixed to each member of the group, this way you are not burdened with renewals of multiple apps and staying indoors can be more fun

When mama said ‘there’s food at home, we never got the insight but adulthood has done a perfect job at that.

You can’t continue to survive on takeouts or the place, we are sure the business will run smoothly without your patronization but will you be fine when you go totally broke? Do you want to return home to mama ? Are you ready to be a bad b*tch running errands, watching plates and watching NTA at 9pm? No, we are not saying home is terrible but………

If the T-fare budget is beyond 1K Naira, don’t leave your house.

Except you are traveling from Lagos to Warri, why are you spending 10k for T-fare inside this same Lagos or Benin? Any movements that will include the fares of over 1k dropping from your pockets, run!!!!! It’s not even December yet and it’s definitely giving signs of detty.

Yes, the season of vacays and matching PJs is here, the girlies are either on a short trip to Zanzibar or the Youkay…and you’ve promised to make sure this December, everybody will feel it. Lagos will bow to how much fun and trips within the city you plan on having. From wine tasting at every sip and paint event to every concert at the landmark event center. This is the December to remember and you will have your feel of it.

The year is 2023, its day 345 of January and an extended version of shege has followed you into the new year and its never-ending. Time is now and it’s of the essence, save your future.

If you dip it, Sapa is actually character development.

The humility that comes from being broke is irrefutable. It is mainly when you’re faced with sapa that you truly understand that there’s food at home, one of the many wonders of adulthood. Eventually, when you’re out of the danger zones of sapalogy into your rich kid mood, remember thy days of thy sufferings and take with you one or two virtues.

Think about the traffic you’re about to face, Bolt surge is not the answer – JUMP THAT MOLUE

Having spent hours on the insane Lekki-Ajah traffic and knowing what sanity is on Abuja roads, we choose sense. Even our blessed Benin city has been devoid of traffic for years until some of you brought traffic from wherever you came from to our Sapele road. Anyways back to the matter, except you plan on spending a higher percent of your budgeted time on the road, your best bet would be the famous molue or as I would like to call it Tuke Tuke.

Not just your time but mostly to avoid the extra fee that comes from the surge, especially during traffic and when prices aren’t fixed. You don’t want to spend all that money on fare when you can be chilling eating a large box of pizza from Panarottis or going by the sufferings of this article, a large pot of egusi soup that can last days. Nevertheless, the choice is always yours.

Delete those screenshots, you don’t need those clothes you’ll never buy them.

Since the screenshot feature came into existence, your media has more IG fashion inspo screenshots than your own pictures. What are you doing with your life? Clearly, you’re never getting any of those clothes, delete all !! Free your phone space so it stops hanging, and don’t incur problems and extra bills.

We don’t have much to say on this, but we know you know. We understand it’s a lifestyle but why upgrade to something with weaker battery health in a country where NEPA is after our lives?

Become a scissors, you might need to cut some people off

If you can’t come straight with your friends, hangout squad, or whatever you chose to call it that you’re broke and making some necessary changes for some last minute Christmas miracle then you might actually have to say BYE-BYE OH

Don’t go to the village this december.

Except you’re going to beg your village people to leave your legs alone we advise you don’t.

Remember growing up and how our aunties and uncle would give us Christmas gifts and money, those aunties and uncles probably have little kids and you’re their uncles and aunties now. Considering the shege we are trying to avoid, do you really want to be big aunty and uncle now? Finally, reflect on how far you’ve come to avoid Shege and stick to the final step.

On the other hand, you can skip all of these and face the 345th day of January, navigating through shege.

Again AVOID OUTSIDE IN LAGOS THIS DECEMBER

Catch up with our lifestyle Here and connect

The Blog is Back ! BlackDotMandy

Gordon’s Playground : Here’s Our Top 6 Highlights of the Night from an Insider
Next Article