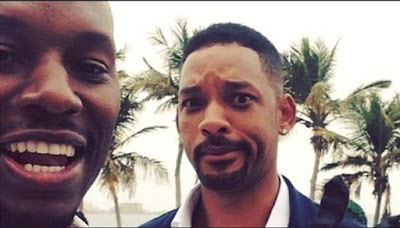 TYRESE GIBSON WAS GIVEN R70 MILLION BY WILL SMITH AND HIS WIFE JADA PINKETT-SMITH TO FUND HIS CUSTODY BATTLE WITH HIS EX-WIFE.

The 38-year old actor has been embroiled in a lengthy legal battle with his former spouse Norma after she sought a permanent restraining order and claimed the ‘Furious 7’ star was abusive to their 10-year-old daughter Shayla.

And with his legal costs mounting up, Tyrese’s friends have stepped in to help him pay his lawyers bills and he has now vowed to listen to their advice to stay away from social media while the case is still ongoing.

Alongside a string of images of Tyrese – who married Samantha Lee earlier this year -with Will, he wrote on Instagram: “When we show UP for each-other there’s nothing that can’t be done I repeat nothing.

“My wife kept the news away from me cause I’ve been on with lawyers all day but our family and our sister Jada-Pinkett Smith and my brother Will Smith just sent us 5 million dollars to help keep us afloat.’

“You’ve guys asked me to get off and stay off the Internet now that my daughters legal fees will be paid I will listen.”

And the ‘How You Gonna Act Like That’ singer has thanked “The Smith’s” for “always” being there for him and his family.

He continued: “The Smiths’s and their whole family has always shown up for The Gibson’s Uncle Will you’re an uncle for real.”

This news comes shortly after Tyrese took to social media to reveal he has been forced to pay out “$13,000 a month”.

And Tyrese has made it known he is disappointed by the lack of support by his close ones during his time of need.

He also said: “I’ve been there for you, why aren’t you there for me?”

The ‘Legion’ star denied the claims from his ex-wife, insisting she was being vindictive because of his second marriage, and he was recently told a subsequent investigation by the Los Angeles County of Department of Children and Family Services would be closed and he wouldn’t face criminal charges.